Am I the only one who thinks folks from the pokie trusts have been telling a load of porkies lately, in their desperate attempts to get public opinion on side?Te Ururoa Flavell’s Gambling Harm Reduction Bill certainly seems to have caused a flurry of lobbying – with Pub Charity and the Lion Foundation, two of the largest trusts, doing much of the lobbying.
In the last week they’ve:
- Emailed thousands of community organisations who are grant recipients, asking them to make submissions opposing the Bill
- Launched a website called Ban the Bill
- Spent tens of thousands of dollars on a 12-page insert in the weekend papers promoting their organisation’s role in the community.
From what I can see, however, all this activity does seem to be based on self-interest, rather than in the best interests of the community.
The Bill, which passed First Reading with a massive 85 votes in favour, with 7 votes opposed, would do away with these self-appointed pokie trusts. They would be replaced with local distribution committees set up by councils, in much the same way the Government’s Creative NZ Fund is currently managed.
Under current law, these trusts are only required to redistribute about 37% of pokie machine takings back to the community. So only about $240 million annually from pokie machine losses goes back to communities. The rest is split between Government levies and the well over $100 million which goes towards the trusts’ own administration costs.
This Bill increases the percentage of pokie machine takings which must be given back to the community to 80%. If the Bill becomes law, the DIA’s latest figures indicate that over $224 million in additional support would be sheeted back to the community in grants, or a total of about $464 million.
The Bill also requires new mandatory gambling addiction prevention measures on pokie machines – something problem gamblers desperately need.
All of this runs counter to what the industry’s saying in the media. Martin Cheer, CEO of Pub Charity, has claimed that the Bill would mean less money for the community. That’s ironic, given that his own outfit is short-changing community groups by nearly $28 million a year, returning only 37.7% of the $65 million currently lost via the pokie machines it owns. That’s one of the worst rates of return of any pokie trust. Mr Cheer ought to clean up his own backyard before criticising this Bill.
What there would be less money for is the expensive salaries and flash offices of the trustees and management in these self-appointed groups. And possibly less for professional rugby and other professional sports.
The reality is that communities are being ripped off by cronyism and rorts in the pokie industry. The funds consumed by the pokie trusts are enormous. The Green Party believes it’s time some transparency and accountability was brought to bear. That’s why we’re supporting Mr Flavell’s Bill.
Submissions to parliament’s Commerce Select Committee close 21 June; to make an online submission click here.
- Green Party MP Denise Roche
Posted by GamblingWatch at 18:30 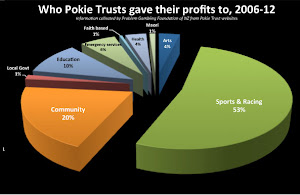